On day 4 of Advent, I found myself walking down Long Acre and into Leicester Square at seven o’clock in the morning. It was still quite dark and I hadn’t slept well. I don’t sleep well –I spend too many days feeling as though I’m shrouded in muslin, and I can’t summon the energy to push the muslin aside. Not until I’ve had some sleep. But I don’t sleep. And so it goes.

It was so hard to extricate myself domestically yesterday that I had no lunch, and the afternoon was followed by a unicorn-rare evening spend really talking with a friend I haven’t see for ages. We were so busy catching up that we forgot to go out for dinner, and I have to be on the first train so haven’t had breakfast. Ahead of me lies the Christmas craft party I’m running this morning, for which the preparations are not complete. I can’t remember where I put the boxes for the peppermint mice. The gingerbread dough is as yet unmade and I don’t know if I have enough ginger. And the sewing machine’s on its last legs, and I should have got white paper instead of brown for the wrapping paper manufacturing. I am tired, lightheaded and stressed, and horribly afraid I’m going to cry.

I make my way to the train, not daring to stop to buy a croissant even though the place is open because there is a long, slow-moving queue and I simply cannot miss the train. And I pray for something. I don’t know what. Surely my purple-winged angel could delay the train just a little, or magic away the queue at the café? Or pop a cereal bar in my bag; I usually carry a couple for the children, just in case, but my bag is empty. I see him and know I’m saved, but instead he chucks a bucket of iced water over me.

In my anxiety to get the train yesterday, I forgot something so important that I don’t even dare to articulate it.

I board the train breakfastless and grab my phone. It’s taken to dying if the charge falls below about 40%, and sure enough, it’s dead before the first ring. It won’t actually kill James to have his medication a day late, but tomorrow it will be two days late, and it takes two days to order, and he needs it, and getting hold of another prescription on a Sunday will take all day, to say nothing of finding a pharmacy that actually has the drugs. Why didn’t he ring yesterday, so I could at least have started the process? We’ll have to cancel the party. If I hadn’t gone to the workshop, this wouldn’t be happening. A performance anxiety workshop for aspiring pianists, and I’d spent most of the afternoon in tears, what with the performance anxiety and all. Now I’d give a great deal to be facing the music literally rather than figuratively.

The thing is, there was absolutely nothing I could do. In time, the train would arrive at the station, and I would drive home, and I would begin the long and painful process of tracking down and obtaining a non-standard drug out of hours. In the gaps, I’d ring round and let everyone know that the party was off. If God wanted to salvage 2016, he could send down an angel with a single pill in a plastic vial. The peppermint mice and marzipan fruits and lavender bags and potato-print wrapping paper which had seemed such a pressure a few hours ago were suddenly highly desirable.

In the enforced period of inaction, I sank into the train seat and closed my eyes. If only the pharmacy was open at weekends; the 6pm on a Friday deadline can be so hard to meet…

With a sense of relief so absolute that I found myself looking round for purple feathers, I realized that I could not possibly have forgotten to pick up the drugs on Saturday, because the pharmacy isn’t open on Saturday. I remembered how far in advance I’d booked the workshop, and how carefully I’d put the pieces in place to enable me to go. There was a reason my phone hadn’t gone mad the day before. It was because no one had needed to ring. I hadn’t forgotten; I’d just planned so carefully that I’d been able to forget.

The party was great. Did you know that if you mix egg white and icing sugar and peppermint essence, you get a pliable dough as satisfying as Plasticine that you can actually eat? And that honeycomb, in the right context, looks like cheese? Or that making marzipan aliens is far more fun that making marzipan fruit, or that wide red velvet ribbon glued round a dolly peg looks like a wise man?

We got home exhausted. Standing beside the bathroom sink was an empty brown plastic vial.

‘I took the last one yesterday,’ James told me as I stared at it.

I looked around for a purple feather, but there wasn’t one. Only a peppermint mouse, nibbling its cheese and winking at me. 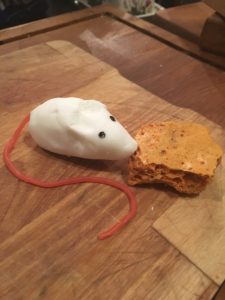