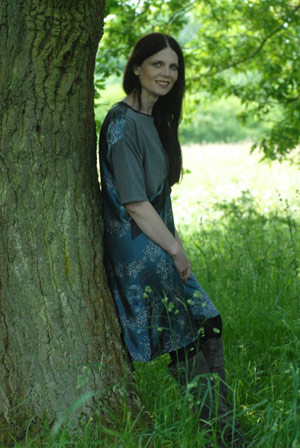 I was born to two people who loved each other; unfortunately this didn’t last, so I’ve largely written off my childhood. Life really began when I went to Manchester University, aged eighteen, to study English.

However, I did write my first novel at the age of eight, in Mrs. Burgess’ class at Benson Primary School. It was about a small red plastic counter making its way through a game of Snakes and Ladders. I remember feeling the sensations of the counter as the dice throw meant that the snake was inevitable; I also remember the frustration of trying to communicate that feeling in words, and the sense that it was of paramount importance to succeed. That novel was never published, chiefly because I had to get changed for rounders.

I never gave up writing, but my failure to emulate Zadie Smith upon graduation meant that I had to earn a living another way. I started out in the Education Department at the Natural History Museum in London, then realised that the Education part of my job had become more and more interesting, and went off to train as a teacher.

I taught for ten years. During that time I wrote a play and took it to the Edinburgh Festival; I wrote a musical (with Rob Chalmers, the Head of Music at Ashcombe School, where we both worked at the time); I was Head of English, Drama and Film Studies at Watford Grammar School for Girls, and finally at North Westminster Community School  (which needs an entire section to itself, and is now an Academy). I loved teaching and was lucky to find, not a career, but a vocation. I miss it.

But I fell in love, and in 2004, I got married. Four children later, I’m working as hard as ever. I’ve kept my babies fed and warm and loved, and if their growth rate is anything to go by, been largely successful in my efforts. I’ve got a teenager in the house now, and three more in the wings, and that’s fun too, but I’ve never stopped writing. Sometimes I even get some sleep.

I’ve always hoped that one day, everything would make some kind of sense. When I finally got a book deal, it sort of did. But the publishing industry, for all its strengths, it a strange and quixotic place for all but the most successful writers (and I’m sure for them too). After almost five decades on this beautiful planet, I realise that the sense isn’t in my gift. All I can do is the best with what I’ve been given, and to help others along the way. I hope that The Ship stays with those who’ve read it, and finds more readers as it sails. I hope that I’ll publish more novels in the future. I hope that, as a published writer, I’ll get the opportunity to teach again in a different context. I’ll certainly always be glad to hear from schools who would like a writer to visit, as well as from book groups, libraries, bookshops, creative writing courses, writers both published and aspiring, and anyone who enjoys reading. I write and present a radio show all about books – the Booktime Brunch Show on Chiltern Radio, Mondays 10-12. Search ‘Chiltern Voice’ and listen in online, and get in touch if you’d like to be a part of it.

Thank you for reading. Let me know if there’s anything you’d like to hear about, or hear more about – after all, if life is not about making connections, what is there left?