You are here: Home / Blog / Of Debut Authors and Thomas Hardy 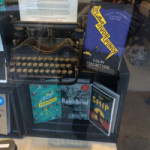 Yesterday evening, four W&N debut authors formed a panel at the tenth Chorleywood Literary Festival, organized by the wonderful Chorleywood Books. Catriona Ward (Rawblood), Colin Macintyre (The Letters of Ivor Punch), Laura Barnett (The Versions of Us) and I, chaired by Morag Watkins, talked about our novels, about getting published and about our writing process, sustained by prosecco, nibbles and a fabulously attentive audience. 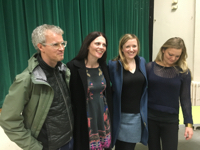 Meeting readers is always a privilege, and together the four of us have appeared at Bradford Literary Festival, a garden party in Frinton on Sea, Waterstones in Covent Garden and in Cambridge, and Lutyens and Rubenstein’s beautiful bookshop in Notting Hill. Last night was particularly significant, as it was the final event in our current schedule. Since our first event back in May, when Rawblood was only available in proof, wonderful things have happened. Colin won the Edinburgh Book Festival First Book Award. Laura spent five weeks in the Sunday Times top ten. In September, Rawblood appeared for real in a beautiful, haunting hardback after a marvellous launch party at Daunt Books in Marylebone and is set fair to terrify many a reader as the winter draws in. 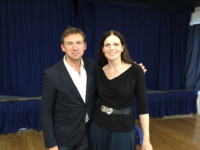 I interviewed David Nicholls for an event at Chorleywood Books recently. Conversation turned (among many other things) on David’s screenplay for Far From the Madding Crowd, and upon Tess of the D’Urbervilles, the novel that inspired One Day. I discovered Thomas Hardy when I was a teenager and fell head over heels in love, so to share that passion with a writer of David’s stature was a privilege indeed. At the signing afterward, an audience member came to tell David about her stepfather’s mother, who had been in service at Max Gate at the turn of the century. While David continued to sign, I was lucky enough to have a conversation with Jill. It was the icing on an already perfect cake. 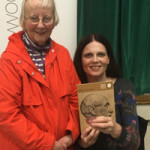 The W&N debut author panel at Chorleywood Litfest shared a similarly easy atmosphere – the four of us have got to know each other and each other’s novels well since May, and enjoy creating the space for each other’s best stories. Morag and the audience were supportive and insightful; their questions were fascinating and the time simply melted away. As I was signing afterwards, Jill came over and presented me with a small box and a card. I was very touched and opened the box immediately. Inside were two small round glass pots with silver rims. But as I read the accompanying card, I was overwhelmed. ‘The salts are cranberry glass with silver rims,’ I read, ‘…and came from Thomas Hardy’s home Max Gate. My step-father’s mother was a parlour maid at Max Gate until 1904… as a wedding present from the Hardys she was given a signed set of his novels and I think the salts were included because one of them had a loose rim… I hope you will treasure them for their connection with Thomas Hardy who drew attention to the hard lives of the people who were the heart of country life.’

Thank you, Jill. I will treasure them, and not just for their connection with Thomas Hardy. They’ll speak of your generosity, and always remind me of a local independent bookshop at the heart of a community, of the support of readers for new writing, and of the abiding power of story in the drawing together of human hearts.