You are here: Home / Blog / Book Festivals – A beginner writes

So Jay Rayner appears at Hay. His audience of 500 people had paid £7 per ticket and he was given a flower in payment.

I absolutely and completely accept that this is not ok. And I admire Philip Pullman for resigning as patron the Oxford Literary Festival on the grounds that the festival doesn’t pay its authors, which is in conflict with the position of The Society of Authors, of which he is president.

But I am just starting out. In common with most debut authors, I haven’t been long or shortlisted for any prizes; my novel hasn’t appeared on Tube posters or in paid advertisements; I haven’t been selected by Richard and Judy, or Simon Mayo’s Radio 2 Book Club. And in common with most debut authors, I’ve worked for years and sacrificed a lot to pursue this dream, with no guarantee it would ever come true. Comforting though it is to believe that good work always finds a publisher and an audience, it isn’t always true. Many glorious and wonderful novels fade away; many mediocre ones sell in their hundreds of thousands while their writers are feted. Cream might rise; good writing needs a bit of help. (It’s true, too, that some brilliant books get the coverage they deserve. I’m just saying that nothing is certain.) 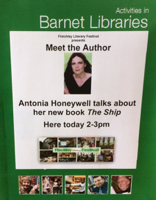 So if I’m offered the chance to appear at a festival, it’s a joy. Writing is my work now. If it’s going to stay that way, I need all the opportunities I can get. And so, whilst my head knows that my time is valuable and that I should be paid, my heart is grateful to the festivals that have welcomed me, either on my own or as part of a panel. They haven’t been the big festivals; they’ve been organized on a shoestring by people who love books, working tirelessly alongside their own paid work, family commitments and other responsibilities – exactly how I got my novel written in the first place.

So while these very necessary discussions are happening, I’m torn. I’m grateful to the high profile authors who have the clout to raise the issue and are using it to defend the rights of authors everywhere. But I’m also heart-glad for the chances I’ve been given to meet and talk to readers, by people who simply couldn’t have asked me if I’d had to be paid.