So. Bertolucci said in an interview that he and Brando planned parts of the rape scene of Last Tango in Paris without telling Maria Schneider, because he wanted to film Schneider’s reaction ‘as a girl, not as an actress.’ There’s a simplicity about his statement that is relevant to this whole Advent quest. There is no religion, no system of law, no moral compass that tells us that two men planning to ambush a young woman in this way was an ok thing to do. And there’s no ambiguity, either. The information has come from Bertolucci.

Some of the things that make me angry are easier to write about. Someone complains that white children aren’t allowed to celebrate Christmas any more, someone else says that London has become an Islamic state. These views are so wrong they’re laughable, and laughing at them is perhaps as good a way to fight them as any. But Schneider (who, Bertolucci says, ‘kind of hated me after that,’) is dead. And Bertolucci expresses no regret. He wanted the shot. My anger, therefore, feels like fighting a giant marshmallow with a chainsaw. There’s no resistance, nothing for the chain to bite into. I think of evil as something hard and strong. In fact, it’s vast and flabby, and when it’s pushed it doesn’t fight back. It simply flops over and pseudo-benignly smothers its attacker saying, ‘Everything was fine until you came along.’

If we’re this floppy about something we all agree on, what chance do we stand on more complicated issues? We cling to absolutes like life rafts, and resent those who try and take them from us. If you think that London has been taken over by Islam, there’s no tour of the city that will change your mind. If you’re determined that Britain used to be a purely white country full of people being kind to each other, you’re not going to be happy about a black family being used in the John Lewis advertisement.

We imperil ourselves when we refuse to listen to one another. A quick scroll through Julia Hartley-Brewer’s Twitter feed shows that her responses to the objections to this tweet 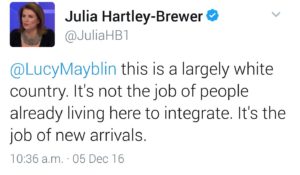 included ‘Why do you think I care what you think?’ and ‘who the hell are you anyway?’ and this classic riposte 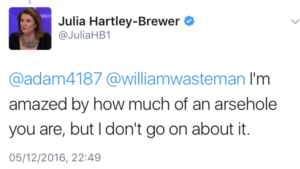 Bertolucci made an idol of his art. He decided that the laws of human decency, along with the laws of the land, didn’t apply to it. The butter was procured, and he made Schneider’s suffering part of his artistic vision.

For the rest of us, for whom butter is something to spread on toast, or to clarify, or to beat into cakes, the easiest thing is to experience a chill of horror, resolve never to watch the film, and move on. But that won’t be the end. We’re seeing the same arrogance every day, as people make idols of their prejudices. ‘That’s my opinion, and I’m entitled to it. Let’s just agree to differ.’

Really? Can we? Unless we’re talking about the best was to take your tea, I’m not sure that I can.