I had one aim for my cloud excursion today. I wanted to see God’s red telephone. The one he uses to talk to Theresa May. It’s reassuring to hear that he’s guiding her through Brexit, but I wanted to see for myself. I also thought maybe I could pick up the receiver, put on a deep voice and say, ‘It’s really arrogant to expect Angela Merkel to go first when you started it.’ But this is God we’re talking about – the Supreme Being who a) felt he needed David Bowie more than we do and b) did something about it. He’d hardly be accusing someone else of arrogance.

I got sidetracked by Alan Rickman, who was wearing a frock coat and saying, ‘Give me some employment, Miss Dashwood, or I shall run mad,’ while a small woman in a bonnet and an Empire line dress jumped up and down excitedly, waving a notebook and saying, ‘That’s it, that’s it, that’s exactly how I imagined him.’ But back on Earth, our boiler’s been condemned and I’m working flat out to keep the children warm. I couldn’t hang about.

I stopped a passing angel, intending to ask for directions, but the angel’s wings drove the words out of my head. They were purple. Strong, sweeping, gloriously spread – and purple. ‘Have your wings always been that colour?’ I asked, but before the angel could reply I knew the answer. I could hear the opening bars of When Doves Cry in the distance. ‘Only since April,’ the angel said. Of course. 2016. Any moment now, I’d see Paul Daniels asking Fidel Castro to pick a card.

But I couldn’t see God. Or a red telephone.

‘Why has 2016 been so rubbish?’ I asked the angel with the purple wings.

‘Rubbish?’ the angel said. ‘It’s been great. The music up here’s had a real burst of energy. And yesterday this chap turned up saying he comes from Barcelona. I haven’t laughed so much since the short man with glasses came and started talking about fork handles with his tall friend.’

I got angry then. ‘Where is he?’ I demanded. ‘At a Leonard Cohen concert? Watching Eurovision? I need to see him.’

And that’s how I ended up being dragged past Gene Wilder and Terry Wogan spinning round like records to Pete Burns, back here, in a house that’s freezing cold, where I forgot to take the shepherd’s pie out of the freezer before I left (not that it would have made much difference if I had) and no one’s done their music practice.

‘You can’t get away with this,’ I shouted at the stars. ‘Forget your Advent. You don’t get to shove all this back on me.’

I went to boil the water for some pasta. And then I got a text. Just a short one. From a friend. A friend I’ve loved for longer than I’ve loved my husband. And it was this. 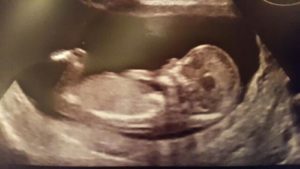 This isn’t the place to explain why it made me cry; it’s not my story to tell. But it means I’m not quite done. It means I’ll go back tomorrow.