Where else can I start today but in Aleppo?

The news coming from Aleppo today is beyond horrific. Civilians are being killed in their homes. Those who have fled are finding that there is not enough food or shelter to receive them; some are even going back on the buses to homes in which they cannot be safe. The international community seems to be doing nothing. Civilians and governments across the world seem to either not care, or (more charitably) be shocked into inaction.

What can we do? We can donate. If donating helps you to cope with what you are seeing, then by all means do. But charity cannot solve this crisis. At best, it is a sticking plaster. A parcel of food while the fields burn; a tent while homes are bombed to oblivion. Action is needed at the highest political levels to bring the civilians to safety, and action is needed at the highest political levels to render those safe places fit for their reception. And then where do they go? It’s easy enough to join the dots forward – people flee for their lives, people shelter in a camp, people seek to make new lives elsewhere, people seek refuge in safer countries, of which the UK is one. But the dots can be joined forwards, they must also be joined backwards. The UK is a place of safety. Trace the line backwards from there, and our responsibility becomes clear.

Meanwhile, on another planet, Kanye West met Donald Trump today, an event of equal magnitude, if we are to judge by media coverage.

Which planet do we want to live on?

Because it is our choice. The God of the Old Testament chose his people and commanded, smote and saved his way through the books. You were either born into the chosen race, or not born into it. Being born into it didn’t mean an easy life, but it meant you had God on your side. For real.  And the smitings made sense – they were punishments, lessons, vindications. We do like things to make sense. We like our stories to hang together. Too many stories are accepted as truth simply because they please our sense of symmetry. We need our goodies, our baddies, we like to boo and cheer and revel in the sense of all being right with the world. But it simply isn’t. As Chinua Achebe reminds us in his poem Vultures, even the Camp Commandant at Belsen bought chocolates for his children on the way home.

The God of the New Testament became a child. In possibly the most extreme ever act of money being put where mouth is, he threw himself on the mercy of his creation. Maybe he, too, wanted to find out who he was – after all, he made mankind in his own image. Yesterday I wrote about Jesus’ birth, far from home, in the only corner Bethlehem was willing to spare. Today, I’m unbearably conscious of the bombarded men, women and children of Aleppo, crying out for a corner to be spared for them.

God is not to be found in the gorgeous gilded building where two men are celebrating their earthly fame. To hear God, we have to hear the cries from Aleppo. Our individual impotence is heartbreaking; if we got on planes and went there, we’d only be in the way, and in danger. But somehow we have to be there.  There is something sacred in the helplessness of others – but to call something sacred is to distance it, to make it other, and making something other is the first step to ignoring it. The power to create the world in which we want to live is in our hands – human hands. The people of Aleppo are bound to us in humanity. They are not us – but they will be us, if we do not hear their cries in our own. 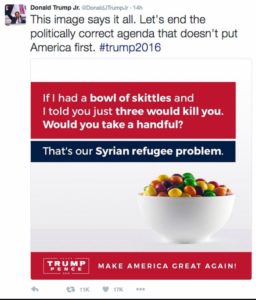 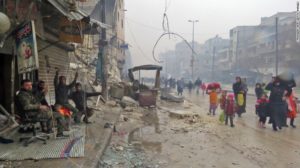